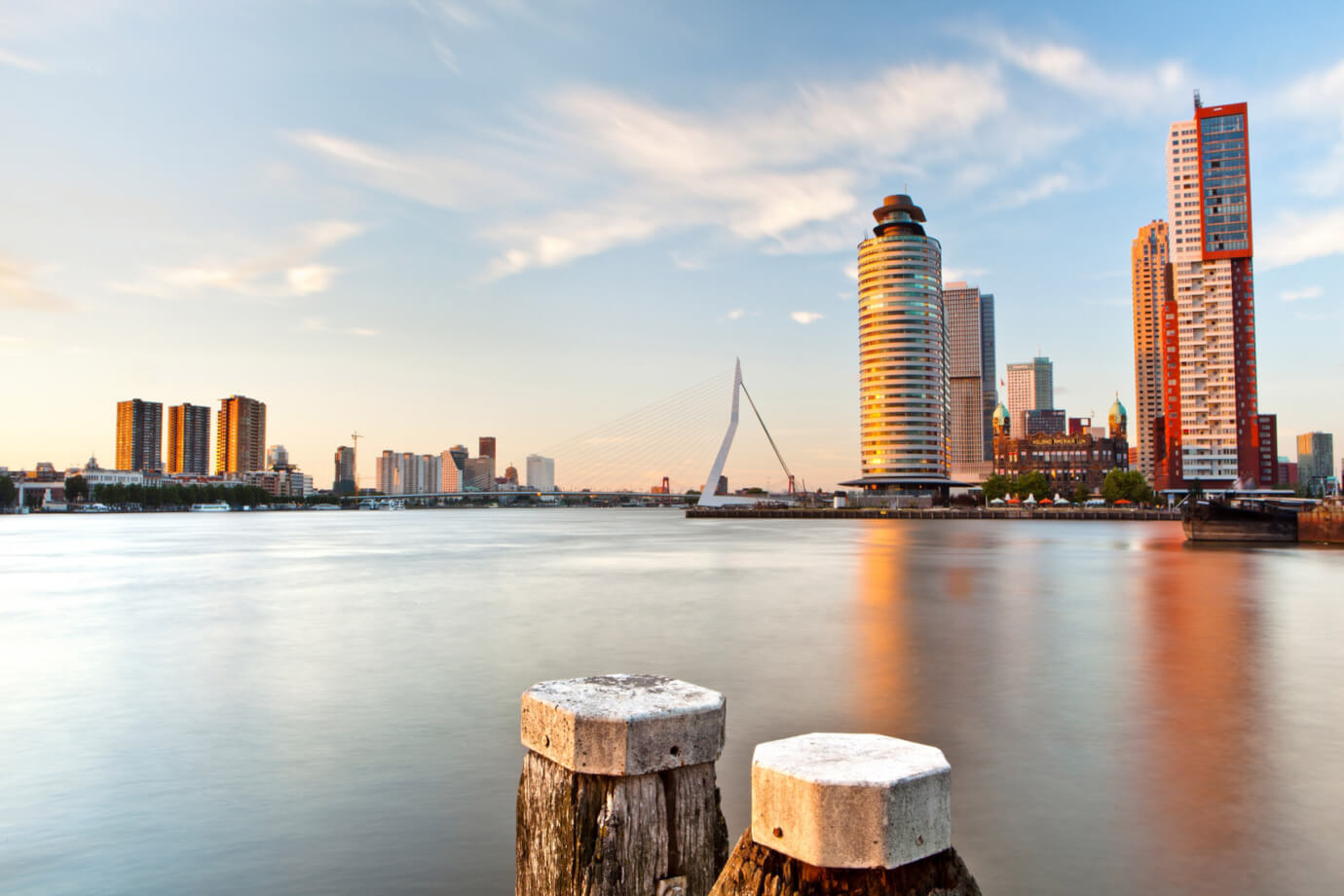 Rotterdam: The city with a modern Skyline

The city with the most modern skyline in the Netherlands.

Of all of Rotterdam’s striking features, its architectural design is the most impressive. Almost no two buildings are alike, but it hasn’t always been like this.

Rotterdam in a Nutshell

The Netherlands’ second biggest city, Rotterdam looks nothing like its fellow Dutch cities. This change in appearance is due to WWII, when the city was bombed by the Germans in a 15-minute raid. Rather than rebuilding a carbon copy city, it was decided to construct a totally new, modern city – something Rotterdam has taken to with great enthusiasm, especially when it comes to its architecture. Everything – from the Central Station and its massive solar energy roof to the swan-shaped Erasmusbrug (‘Erasmus Bridge’) – is worth looking at.

Rotterdam is an event city. There is almost always something going on, making the question ‘What to do in Rotterdam?’ an easy one to answer. From the International Film Festival to the World Harbor Days, it's always worth checking the calendar to see what's going on.

Things to do in Rotterdam

With one of the largest harbors in the world, Rotterdam and the Meuse river are important partners. You can explore both from the comfort of a Spido Rotterdam boat. Or you can take to the sky by visiting the Euromast tower. Built for the 1960 Floriade, it has been a listed monument since 2010. The observation tower will give you a view over the city from 96 meters (315 feet) high.

In the aptly named Museumpark, you will find Museum Boijmans van Beuningen, with its outstanding art collection covering many centuries. And the Kunsthal – showing contemporary and experimental art – the Natural History Museum and the Sonneveld House – a 1933 villa showcasing the Dutch Functionalist architectural style – are also situated there. You could easily spend a whole day in this area alone, but there's plenty more to see in the city.

The Markthal – Rotterdam's upside down horseshoe shaped covered market – was opened in 2014. Under a ceiling showing an impressive (modern) Cornucopia scene, food vendors sell their wares. Restaurants and food-themed shops complete the culinary package. This is a building that needs to be explored and enjoyed. We'll leave it up to you whether you do so with a full or empty stomach!

Near the Markthal, you’ll encounter Rotterdam's iconic yellow Cube Houses. A mixture of private houses and hostel accommodation, one of them is open to the public as a museum. Don't miss the 15th-century church St. Laurenskerk, which is also in this area. And the Oude Haven – with its waterside restaurants and bars – is only a few minutes’ walk away if you’d like to cool down and relax with a drink and a bite.

If you’d like to get a glimpse of Rotterdam pre-WWII, venture over to the Delfshaven district. This section of the city did survive the war. In addition to the more traditional Dutch houses, you'll also find the Oude Kerk there. In this church, the Pilgrims prayed for the last time before leaving for the New World, North America.

Rotterdam, the Netherlands can easily be reached by train. Then, you'll have the bonus to experience the impressive Rotterdam Central Station. A train journey from Amsterdam Central to Rotterdam Central takes just 45 minutes. Once in Rotterdam, you could easily cover the city on foot or bike. However, there are also trams, buses and the metro for you to take advantage of. And if the weather is good and you’d like a fast-paced ride, you should try one of the water taxis.