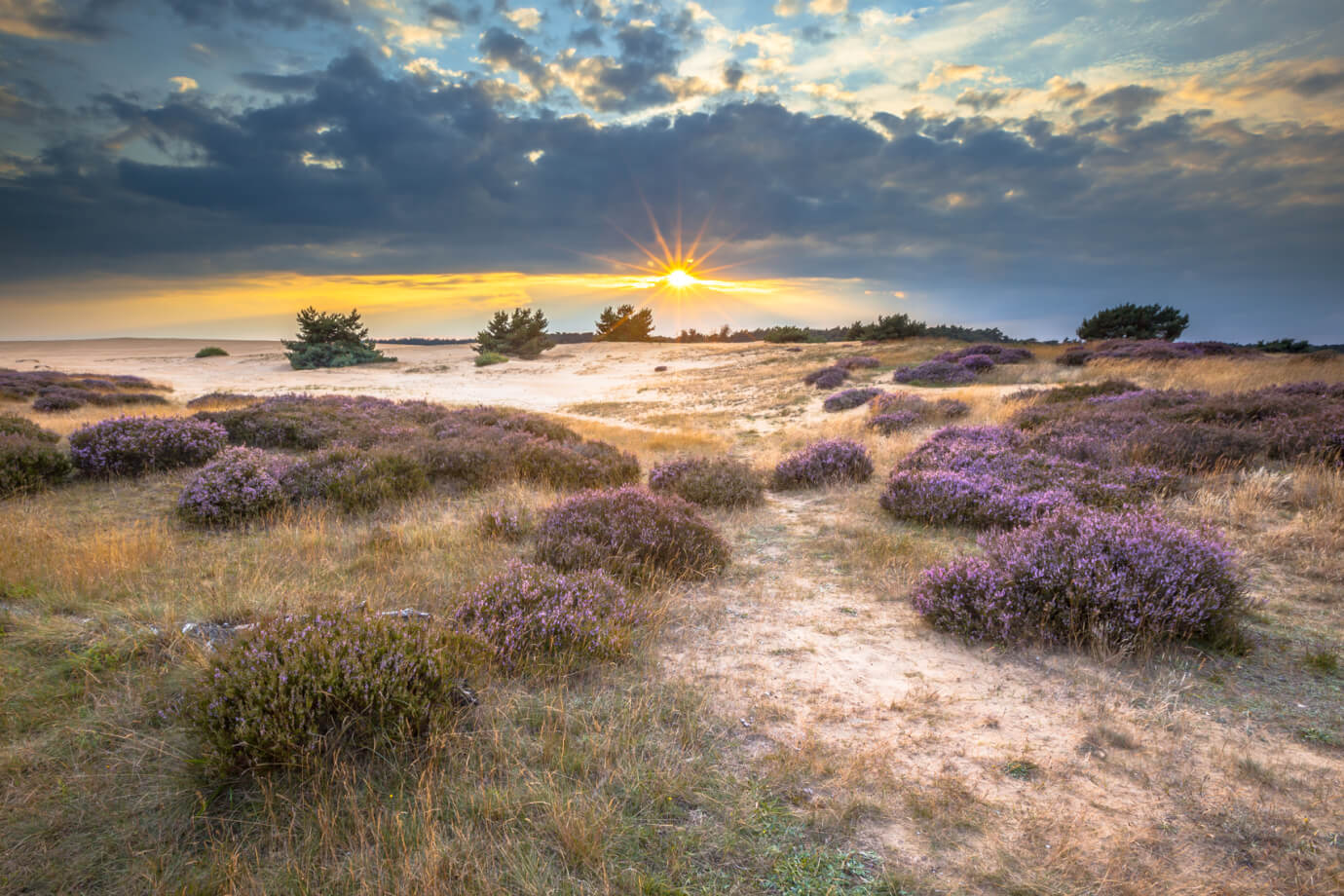 Immerse yourself in the Netherlands’ largest national park, then explore beyond it.

In the northwestern province of Gelderland, the Veluwe is a geographical masterpiece. This ridge of hills is covered in some of nature’s most spectacular landscapes, including forests and woodlands, small lakes, swamps and epic sand drifts. Because of its varied habitats, many animals call the Veluwe - more particularly, the Hoge Veluwe National Park - their home.

The Veluwe is a favorite vacation spot for Dutch locals as it provides a pleasant escape from daily life without having to travel too far. Camping in tents or cabins in the park is popular throughout summer, when visitors hike the many trails. Culture buffs will love the Veluwe too because the area is home to over 50 museums and the splendid Het Loo Palace.

With over 13,000 acres to cover, you’ll need more than 1 day to see everything in the Netherlands’ largest national park. There are 12 walking trails within the Hoge Veluwe that take visitors via the park’s most spectacular vistas. Pick up one of the 1,800 white bicycles available free of charge throughout the park and cycle through 25 miles of bike path. You might spot a red deer or wild hog in its natural habitat. Each month, the park warden runs a special safari tour that takes in particular areas (depending on the season). It’s the perfect opportunity to get up close and personal with the native flora and fauna.

Within Hoge Veluwe lies the Kröller-Müller Museum. Filled with 19th and 20th century art, it’s also home to the world’s largest privately owned collection of works by Dutch Post-Impressionist painter Vincent van Gogh. Here you’ll also see work from the likes of Piet Mondriaan, Carl Andre, Barbara Hepworth and Pablo Picasso. Helene Kröller-Müller – once 1 of the Netherlands’ wealthiest women – created the museum. She collected more than 11,500 pieces of art and is regarded as one of the first to recognize van Gogh’s genius. Also part of Kröller-Müller is a 25-acre sculpture garden, surrounded by forest, which makes for a truly immersive art experience.

Have a royal moment at Paleis Het Loo

King’s Day may be the biggest celebration in the Netherlands, but year-round, there’s no better way to get immersed in Dutch royalism than by visiting Paleis Het Loo, or Het Loo Palace. Between 1684 and 1686, the palace was built for stadtholder-king William III and his wife Mary II of England. It stayed in the same family until 1962, and in 1984 became the museum it is today. Filled with many of its original furnishings, the building was crafted in the understated Dutch Baroque style – noticeably in contrast to France’s famous Palace of Versailles, which was built some 60 years earlier. The grounds are a sight to behold; they are still in their original 17th century style with designs so intricate they resemble engravings.

With train services departing from Amsterdam and taking between 1 and 2 hours, the Veluwe is a must-see during any visit to the Netherlands. Purchase a Holland Travel Ticket and forget having to worry about multiple tickets and transport. Simply hop on a train, bus or metro service and go!